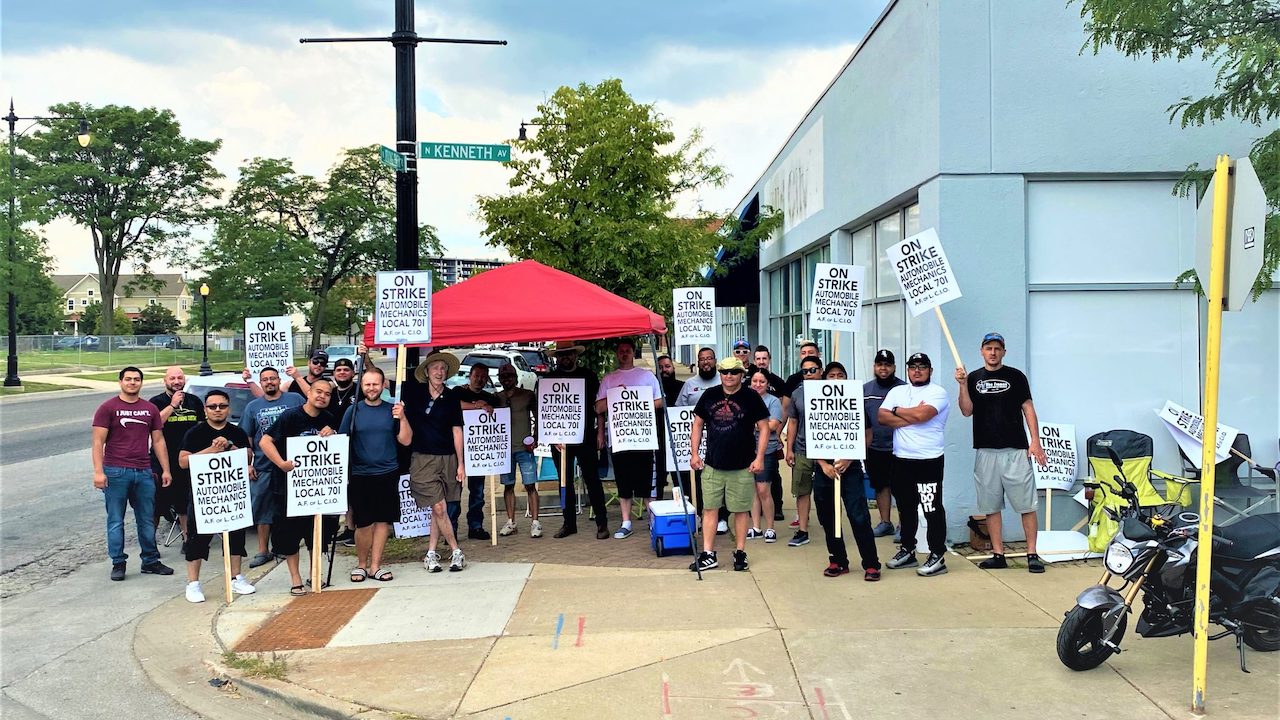 This is a guest post by Adam Shils, originally published at International Socialism Project on August 18, 2021.

The general quiet of the current Chicago labor scene has been broken by two important events: the auto mechanics’ strike and the Naperville teachers’ contract battle. The purpose of this article is to look at these two examples of working-class fightback.

About 800 auto mechanics at 56 new car dealerships in the Chicago area have been on strike since August 2. The mechanics or techs are part of International Association of Machinists (IAM) Local 701, a large amalgamated local. The bosses are represented by the New Car Dealer Committee (NCDC), which is the collective bargaining vehicle of the Chicago Automobile Trade Association. Labor struggle is not new for the IAM and the NCDC and there was a seven-week strike in 2017.

This time round, the issues fall into two categories. The first category is traditional collective bargaining issues, such as pay schedules and payments into the Health and Welfare Fund. The second category is more complex and potentially dangerous. This is the “Most Favored Nation” proposal. Most Favored Nation is a term normally associated with international trade negotiations. It has a specific meaning in union bargaining. It means that if any employer that has a contract with a multi-employer union local finds out that another employer has negotiated a contract with terms more favorable to management, then the first employer can automatically impose these worse terms on their own workers.

For example, if a small dealership, in an area where the union is weak, is able to force its workers to accept a contract that pays $5 less an hour than the contract of a big well-organized local, then other employers would be able to legally move to the new, lower wage rate. This “race to the bottom” is obviously a very serious threat to the union. In the last several days, the NCDC has made some noise about taking this issue off the table. It remains to be seen if this is merely a bargaining table maneuver or represents a serious position.

The union is attempting to get dealerships to break from the NCDC and sign their own agreements with the union. These contracts have the spy movie-like title of “Defector Agreements.” The union has been able to get at least nine dealerships to make their own contract settlements. There are pickets at dealerships all over the Chicago area. These pickets are well organized and attended. There are generally tents, coolers, and folding chairs. Morale seems good. The union’s website and social media provide helpful updates.

This is a relatively large and a highly visible strike. The union’s goal of defeating a Most Favored Nation agreement is an important one. The solidarity responsibilities of the Chicago labor movement are clear.

Naperville is a large suburb west of Chicago. School District 203 is a large K-12 district with about 17,000 students. The roughly 1,500 teachers are represented by the Naperville United Education Association. The previous contract expired at the end of June. The new school year is set to begin on August 19 and the two sides have not reached an agreement.

The union organized the second of two large demonstrations on August 16. Over 500 union members and supporters, all wearing red shirts, filled the parking lot at Naperville North High School. Following a stirring speech from union president Dan Iverson, there was a march to the school board meeting. The union members were in high spirits and received noticeable support along the march route.

Two issues have dominated the bargaining sessions. The first is the very straight forward proposal that teachers be able to use accrued sick days for birth or adoption parental leave. The second issue needs a little explanation. District 203 uses a cumbersome and time-consuming approach called Multi-Tiered Systems of Support. MTSS is an educational fad that requires teachers to engage in a laborious process of aligning individual student work with official state requirements and rules. The union has taken the stance of not opposing the MTSS itself, but insisting upon compensation for the hours and hours of extra work involved in this procedure.

More bargaining sessions have been scheduled. The union is not legally allowed to strike until August 25. Illinois law prohibits striking until 10 days after both sides’ statements have been posted by the Illinois Educational Labor Relations Board. The Board messed up the postings and therefore the 10-day clock was started late. The word is that this was not a conscious tactic to disrupt the union, but springs from another source. The Board has sub-contracted its website and the postings on it! You couldn’t find a better example of how far things have sunk in labor negotiations in this country. A labor relations board, where unions are meant to go to fight sub-contracting, sub-contracts its own essential functions! No one can say that the ruling class isn’t shameless in its desire to save a buck.

The Chicago auto mechanics and the Naperville teachers show that labor may be down, but we’re certainly not out.

Primaries in Argentina: Categorical defeat of the Alberto Fernández government and great election of the Left Unity Front