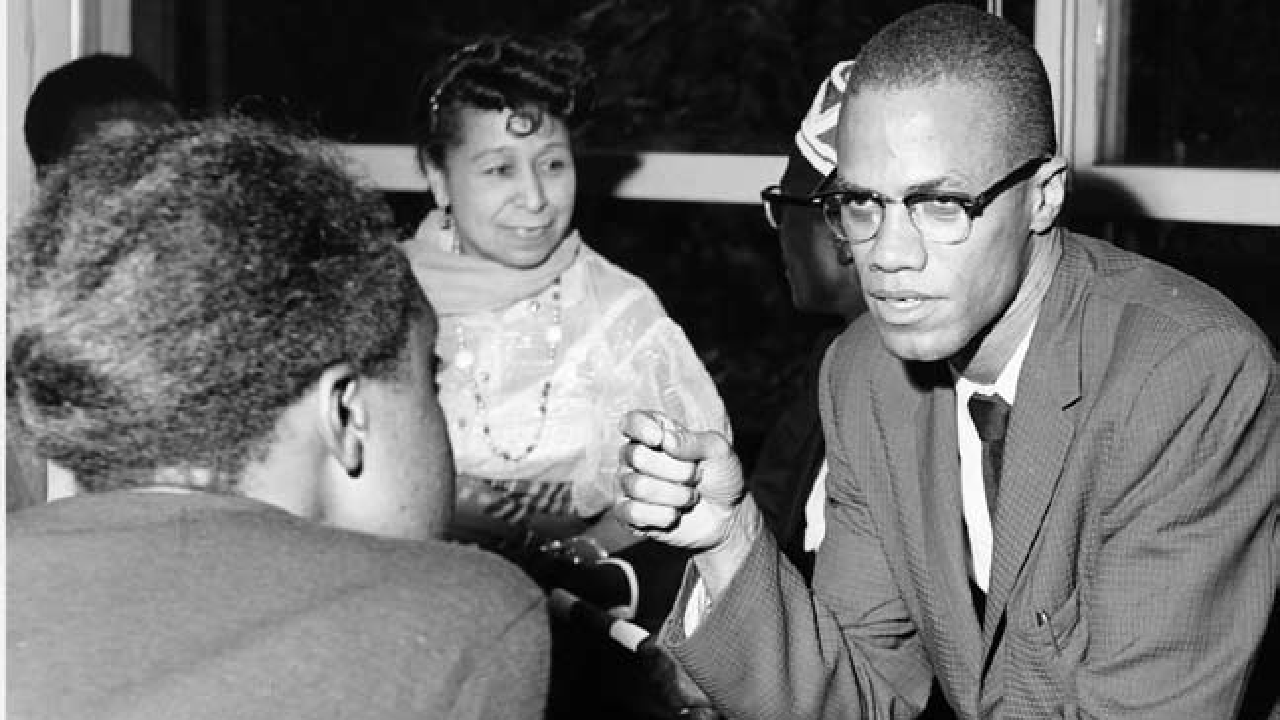 This May 19th we celebrate the life and legacy of one of the most legendary figures of the Black liberation movement in the U.S.: Malcolm X. Malcolm was born in Nebraska in 1925. When he was very young his father was assassinated by white supremacists because of his radical speeches advocating for liberation. Malcolm’s mother had to support and raise the entire family of eight children – an experience which deeply impacted Malcolm as throughout his childhood he faced the double condition of being Black and poor in America. As he grew up he struggled between making the choice of following the rules of the system, by getting good grades and becoming the class president, or refusing to fit in and follow the role that had been assigned for him. As he writes in his autobiography, “Early in life I learned that if you want something, you had better make some noise.”

When he reached his teenage years and he was confronted by his teacher who said that “Black people couldn’t be lawyers,” he gave up the hopes of fitting in a racist society that gave him no opportunities. He dropped high school and moved to New York City where he became known as “Detroit Red.” He felt deeply connected with the daily life of the Black communities in the Bronx and Boston, and he adopted the lifestyle he saw around him. His experiences together with his rebellious nature led him to become a hustler, a small time thief, and eventually earned him a jail sentence.

His years in jail proved to be transformational. He adopted the sect of Islam preached by Elijah Muhammad, and through that started to read avidly, deeply questioning society around him and the racism he faced in his own life. The words of Elijah Muhammad and his Nation of Islam spoke deeply to Malcolm’s experiences growing up in a racist society. Once he came out of jail he officially became a part of the Nation of Islam and moved around the country making speeches about the need for Black militancy and self-determination from the white world. But he started to desire even larger changes, and became more outspoken about his radicalism, which eventually led to a break with the Nation of Islam.

Malcolm spoke about what many Black people in the urban areas of the US felt deep in their hearts. They were tired of the racism that framed their lives day in and out, and they were tired of compromise. His change of ideas correlated too those who participated in the civil rights movement but didn’t see non-violence being effective in bringing about the changes they desired. As historian Howard Zinn writes, Malcolm was not afraid of condemning the government for trying to co-opt the movement, especially after the March on Washington and the erasing of the most radical speeches.

Malcolm spoke clearly of the oppression of poor Black men and women and the need to defend themselves against their exploitation no matter the cost. Over time, he came to see that it needed to be an international struggle for Black liberation, and even later in his life he began to make the connection between capitalism and the oppression of Black people around the world. His determination and unwillingness to compromise until racism was fully addressed inspired people who also were fed up with the system. Today his fight for Black liberation continues to be relevant as capitalism still benefits from racism and the divisions it causes between Black and white workers. The relevance of his ideas for today come through in an interview with The Militant in 1964: