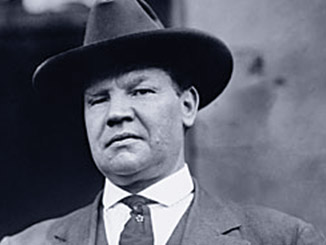 He was born in 1869 in the Mormon frontier settlement of Salt Lake City, Utah. His father died when he was three. At age seven, he blinded himself in one eye in an accident with a sling shot. At age nine, he was already working in the mines to help support his family.

Later he left mining and went to Nevada to try homesteading, but the government took away his land, leaving him with his disabled wife and two daughters to support. His dream of being a free man with his own land died. He was forced to go back to mining.

He was active with the metal miners in Butte, Montana, in 1893 and then went on to help organize the Western Federation of Miners (WFM) in 1896, becoming its General Secretary.

The union engaged in very militant and difficult strikes against the dangerous conditions of mining in the West. In dozens of strikes they battled against government attacks. These attacks came in the form of court injunctions, state militia, imprisonment and deportation of strikers, as well as attacks by armed guards hired by the mine owners, who beat and even lynched and murdered militant workers.

The WFM was one of the major forces that he led to found the revolutionary union movement known as the Industrial Workers of the World. The IWW came into being in 1905 just as the workers of Russia were engaged in their own revolution and as the sailors of the Battleship Potemkin were mutinying and taking power near Odessa.

Haywood, a major force and the chairman of the IWW founding convention, hailed the gathering as “the continental congress of the working class.” The convention was composed of left leaning worker militants, and members of socialist and anarchist groups from around the country.

Haywood and the IWW believed in “direct action” to solve the workers’ problems. They thought it was only the workers’ day-to-day struggles that could win. They were cynical and suspicious of elections and political parties–though many of them, Haywood included, were members at the time of the Socialist Party of America.

Their long range goal was a general strike of the whole working class that would lead to the seizure of industry, locking out the employers and then taking over and running the economy and other activities.

At the time, the working class had very little organization, and the unions that did exist only organized the white, male, skilled workers along craft and trade lines. Haywood saw the American Federation of Labor (AFL), the main national union federation, as too narrow and exclusive.

He also criticized the AFL for accepting capitalist exploitation and the bosses’ rules. Haywood believed that new unions had to be built around revolutionary principles.

Haywood served in many capacities in the WFM and the IWW, as well as in the leadership of the Socialist Party of America. He was an outstanding orator, an excellent organizer and had an imposing presence. John Reed, the socialist journalist, described his face as “scarred like a battlefield.”

In 1906, Haywood was arrested with two other activists, accused of killing the former governor of Idaho. The trial was a government frame-up, engineered by the Pinkerton detective agency, a well known anti-union operation. A big labor defense was organized for them, and the Socialist Party press carried their case in detail and crusaded for their freedom.

While in prison, Haywood ran for governor of Idaho.  He was later acquitted of all charges. Frame-ups like this one, however, tied up large amounts of energy, money and talent and took militants like Haywood away from organizing workers’ struggles. This was obviously the government’s game plan.

In 1910, Big Bill went to Europe, where he participated in helping to organize strikes in Ireland and South Wales.

He also went to a conference of the Second International, a body that grouped socialist parties from all over the world. He met Lenin and Rosa Luxemburg and other leading European revolutionaries of the day.

The leaders of the Bolshevik Party, who led the Russian Revolution of 1917, had great respect for Haywood and other IWW militants even though they had political differences with the IWW over the kind of workers’ party that needed to be built to lead a revolutionary struggle.

In 1912, Haywood was a leader of the IWW’s Lawrence, Massachusetts strike of textile workers, mainly immigrants from many different countries. It was also a strike in which women workers played an active role.

Haywood made a speech to the workers about the need for unity. He demonstrated this by explaining the difference in power between the fingers of an open hand versus a clenched fist that could really strike a blow.

He helped work out a way for each nationality to have separate strike meetings in their own language to discuss and participate in decisions for the strike. Haywood and the IWW were actively opposed to any form of racism, sexism or discrimination of any kind.

At the 1912 convention of the Socialist Party, a revolutionary left wing gathered around Haywood to oppose the party’s reformist leadership. After the “Reds” were defeated at the convention, Haywood was expelled from the party’s National Executive Committee.

During World War I, the U.S. government went on a witch hunt against left-wing unions and radical organizations, and the IWW was one of its prime targets. There was a huge government raid on IWW headquarters around the country, and its leaders were charged with sabotaging the war effort. Haywood and others were once again on trial.

The trial received a lot of publicity. Haywood himself testified for three entire days. This trial tied up all the movement’s resources with fundraising and the legal defense. It was really the death knell of the IWW’ s militant activism.

In 1918, the IWW leaders were convicted. Their appeals were lost. Haywood, who was in bad physical shape and exhausted, faced 20 years in jail and a fine of$30,000.

Unable to face his conviction, Haywood jumped bail and ran away to Moscow to be a part of the Communist International Trade Union Bureau. Shortly before this, he joined the newly founded U.S. Communist Party.

He lived in Moscow for seven years, until his death in 1928. Sadly for him, these years were exactly when the new Russian revolutionary government was being bureaucratized and taken over by Stalin.

Lenin was ill and then died, and Leon Trotsky was being pushed from any role of consequence in the Russian government. Haywood spent the last years of his life alone and isolated, unable to play a role in the workers’ movement.

But despite this tragic ending, Big Bill Haywood should be honored and remembered for all of his contributions to the struggles of the U.S. working class. He stood clearly on the workers’ side for his entire life, no matter what the consequences. When the working class fights again in the future, Bill Haywood will be remembered.