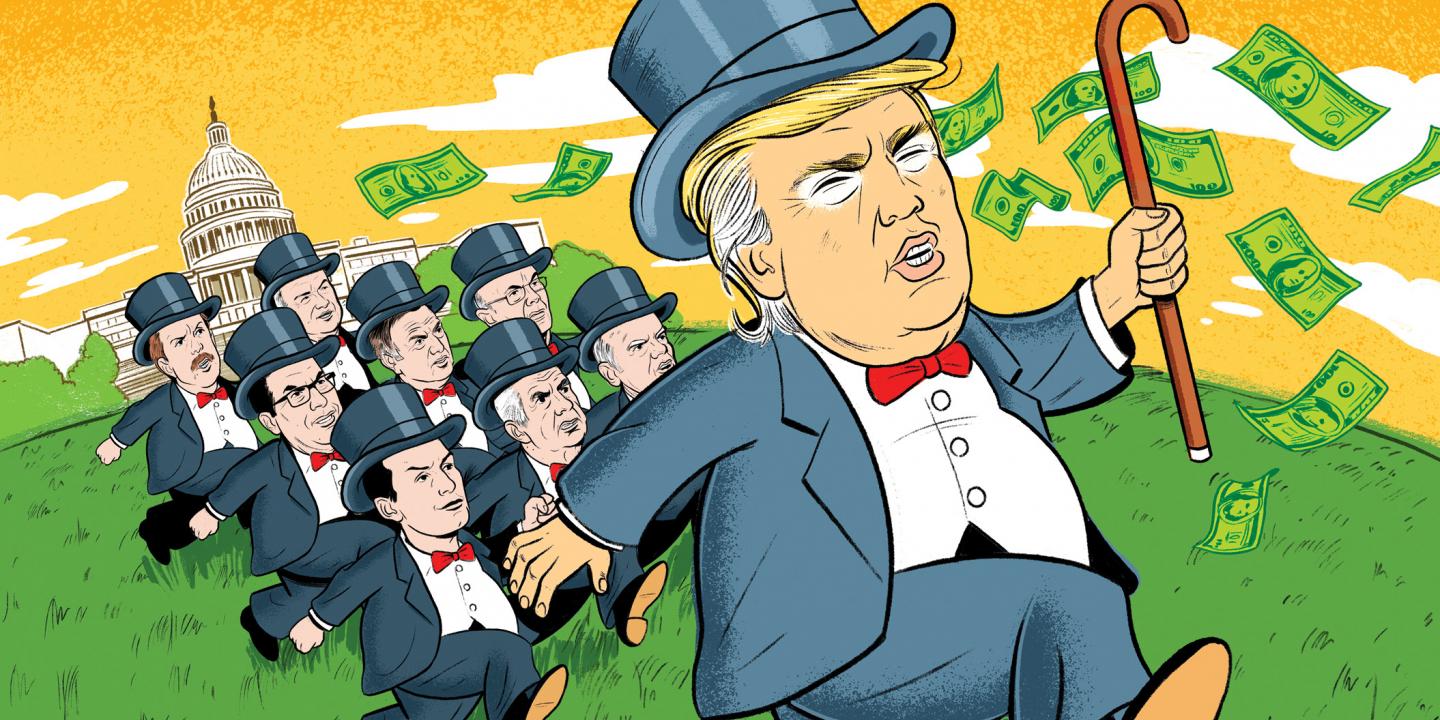 It’s been a year since the election of Trump and it couldn’t be any clearer that this is an administration that only represents the richest of the rich. For those workers who may have thought that he would fight in their corner, Trump has made it clear: he’s in the opposite corner with his gloves ripped off. On every policy that matters to working people – our families, our jobs, our health care, our children’s education, our environment and more – Trump has shown that his only concerns are the profits of billionaires, banks and corporations.

When it comes to health care for working people, we just want our costs to go down and our quality of care to go up. But every new health care proposal from the Trump administration has promised cancelling insurance coverage for millions of people, cuts to Medicaid, increased costs, and freedom for insurance companies to raise rates and deny coverage, which could mean a death sentence for some. And while we wait for their next proposal, millions of workers and the poor have to worry whether our coverage will be cancelled, our subsidies cut, our premiums increased or our treatment plans reduced.

And Trump’s tax policy doesn’t even pretend to be anything but a massive gift for him and his billionaire friends. What amounts to trillions of dollars in tax cuts is nothing but a transfer of wealth from workers and the poor to the richest people in the US. When Trump says “make America great again”, he only means making the filthy rich even richer.

The more aggressively the Trump administration pursues policies that benefit the super rich at the expense of workers and our families, the more his administration sees the need to try to divide us. The main concern the class of billionaires have under Trump is if the majority of working people who make society run were to unite against them. This is why the Trump administration has not skipped a beat in its racist, anti-immigrant messages. They have doubled down on their discriminatory travel ban and have continued their anti-immigrant attacks, calling immigrants job stealers and criminals. The Trump administration wants American workers to think we have more in common with Trump and the billionaires he defends than we do with ordinary workers who happen to be born in different countries. But we have nothing in common with those whose entire fortunes have been built off the backs of workers.

And if the racism and anti-immigrant attacks they spew out aren’t enough to divide us, the administration seems ready to rely on war. They hope the threat or even reality of another war abroad will rally support behind the president in order to distract workers from the class war being waged against us at home.

Under Obama and the Democrats things may have seemed a bit better. But they too carried out the agenda of the corporations and banks while attacking the quality of life of workers. Since Trump’s election, all the Democrats do is complain about Trump and worry about how to win the 2018 and 2020 elections. But changing politicians won’t stop these attacks.

What we are facing is clear. The rich who run this society have only one priority: to increase their fortunes while they wage war on us at home. The Trump administration is making it easier to see what side they are on. They think we will fall for their divide and conquer strategy forever. But what they have done is made the class line even clearer. The real battle lines have been drawn, with workers on one side and their class of billionaires on the other.

Since the election, the Trump administration has been busy trying to carryout their “America First” policies. They have made it undeniably clear that the only people in their America that even matter at all are the rich who control the banks and corporations. On every single issue of concern to working people, Trump and his administration are against us. Under the Democrats too, the government always represented the interests of the wealthy. But with Trump the mask has been ripped off, revealing that their true interests lie in protecting the wealthy through an open assault on working people.

The world’s super rich are the richest they’ve ever been in over one hundred years, with the top one percent owning more wealth than the rest of the world combined. About half of the wealth of all billionaires is owned by US billionaires, over 2.8 trillion dollars worth. Trump’s tax proposal would make them even richer, amounting to actually trillions of dollars in tax cuts for the richest people in the country while most workers will likely pay more in taxes or see no change at all.

Health Care for the Rich

The Trump administration has tried to pass three different health care bills to replace the Affordable Care Act, which was inadequate to begin with. Their proposals would cut close to 30 million people from insurance coverage while removing any restrictions on insurance companies from denying coverage or raising premiums. These proposals include gutting an estimated $880 billion to Medicaid over ten years and approving even further cuts in the future. And most of these cuts in funding would come from eliminating taxes on the super wealthy.

Trump appointed as the head of the Environmental Protection Agency (EPA) Scott Pruitt, a former Attorney General and Senator from Alabama and a lifelong opponent of the EPA, who’s built his career protecting energy companies. Trump has given approval for energy companies to have access to our National Parks and to drill in the Arctic. Under Pruitt, the EPA doesn’t even pretend to enforce the most basic restrictions like protecting whales from fishing nets, pollution regulations, or minimal caps on emissions of greenhouse gasses.

More Attacks to Come! Unless…

For Trump, the attacks on working people are just getting started. With the appointment of Justice Neil Gorsuch, a staunch opponent of working people, the Supreme Court will be used as another weapon against workers, soon ruling in cases that will further weaken workers’ unions, increase attacks on women’s access to abortions, and deteriorate the basic civil rights of LGBTQ people. Under Education Secretary, Betsy Devos, the administration plans to cut more funding from public schools and further privatize education. And these are just some of their plans they would like to carry out.

The Trump administration is clear about their plans for workers in this country. But we don’t have to be passive in the face of these attacks. Now workers have to become clear about our plans to put a stop to their agenda.

Making Work Less Safe: Trump’s new Occupational Safety and Health Administration (OSHA) director had the agency stop enforcement of new standards for safety around air quality at the workplace. And further funding cuts to OSHA will mean more programs of workers safety will also be cut.

Increased Wage Theft: Federal minimum wage laws and overtime pay protection are supposed to be enforced by the Department of Labor. Trump has proposed to cut its budget by $2.5 billion. And Trump’s appointee for Secretary of Labor, Alex Acosta, has agreed to let employers cut the number of workers entitled to overtime pay. He also eliminated the requirement to publicize the names of companies that violate wage laws. As attorney on the National Labor Relations Board, Acosta regularly ruled on the side of companies against workers and even voted to make it easier to fire workers for going on strike or for trying to form a union. And as a US attorney in Florida, Acosta defended the rich and even gave a reduced sentence to a billionaire in a high-profile sex case involving young girls.

Discriminating Against Workers: Trump picked Daniel Gade and Janet Dhillon to head the Equal Employment Opportunities Commission (EEOC), the federal agency responsible for enforcing laws against discrimination in hiring and pay. Dhillon is a corporate lawyer who has sued the EEOC to stop it from investigating big companies like JC Penny for wage discrimination. Gade is a disabled war veteran who is opposed to disability pay for veterans and against women serving in the military. Under their direction, the EEOC will be used to reduce or even eliminate requirements for companies to follow basic anti-discrimination rules on hiring, firing and pay.