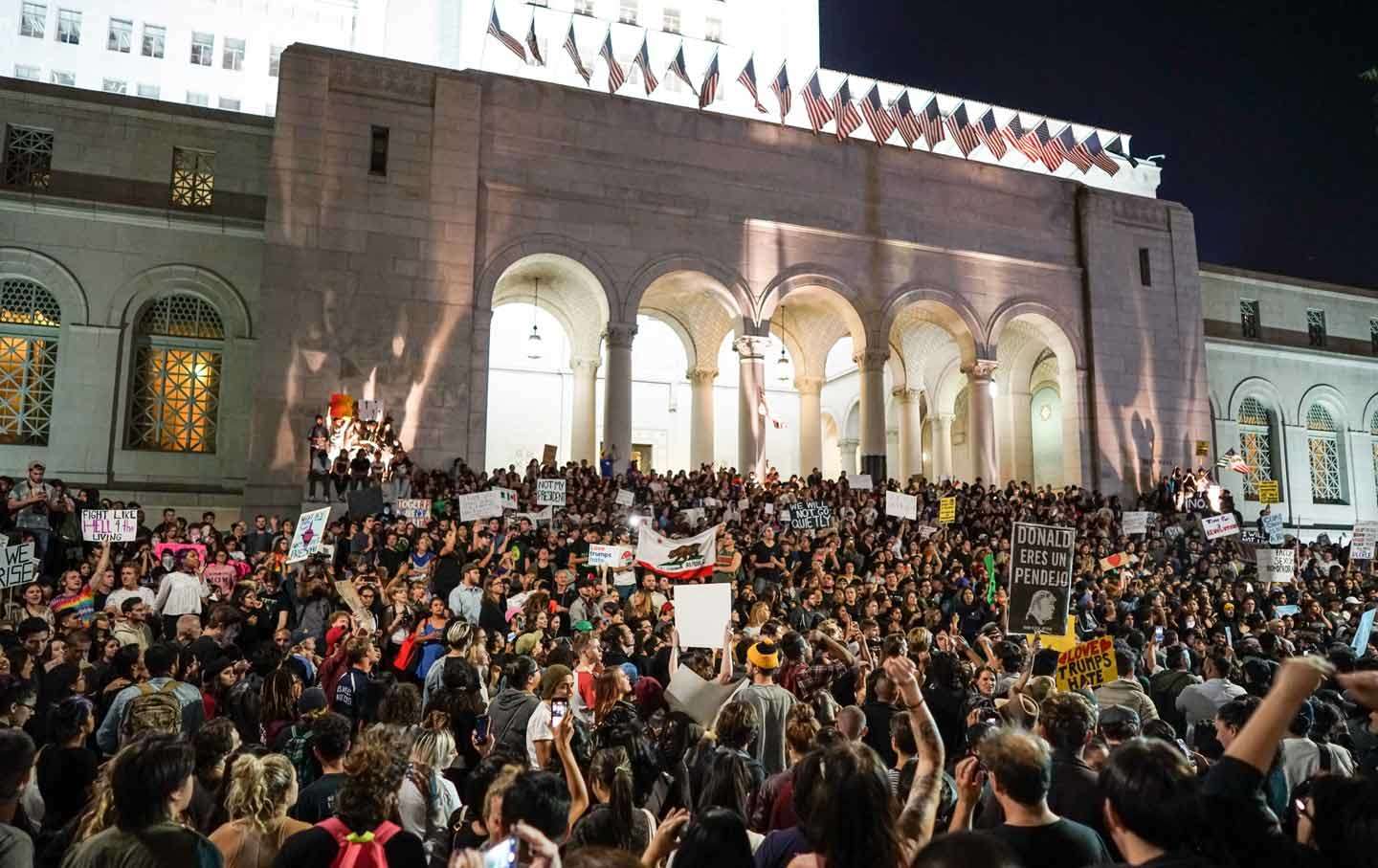 Many people are in shock that a racist, anti-immigrant, anti-woman, anti-Muslim bigot who thinks global warming is a hoax and that torture is OK, will soon be the President of the U.S. Trump pretended to be an outsider – a man of the people. He is a billionaire tycoon, who tried to block workers at his job sites from organizing unions and lives in a gold decorated penthouse like a king.

He is a master of reality TV and his political reality TV show worked. He played on people’s prejudices and fears – the traditional blame game – telling white workers and middle class people that their problems were caused by Washington politicians, minorities and immigrants. He is a defender of the capitalist system with its push for profits at the expense of our lives, our health and the very survival of the planet.

And the corporate media played along, giving him massive free publicity every time he opened his disgusting mouth or sent a vicious tweet. Fox News showed Trump as the hero who would make America great again. And any workers or women, or minorities or gold star families or protestors who criticized him were unfair, wrong or anti-American.

Many people are sad and disappointed that Hillary Clinton didn’t win. But the disappointment is based on illusions that the Democratic Party would represent our interests. People saw the Democratic Party in action as it assumed that everyone would line up behind her just because Trump was so despicable. Clinton campaigned on the so-called accomplishments of the past 8 years and promised more of the same. She is a true representative of the rich against the working class.

The real failure of an economic recovery for the majority turned many working class voters towards Trump, or meant that almost half of those eligible to vote chose not to vote. Their elections gave us the choice between a billionaire bigot and a corporate politician—this is no real choice at all.

Facing a Trump presidency, many people are afraid. Racist and anti-Muslim talk, graffiti and even attacks have begun. Racist groups like the Ku Klux Klan are emboldened and ready to come out openly to spew their racist filth and hatred.

People’s fear is based on real threats that Trump has made. He promised to deport millions of immigrants and take away the protected status of young undocumented students, to cut off funds to sanctuary cities, to bring back “stop and frisk,” making police repression in minority communities more violent than it is now. He promised to reduce or eliminate women’s health services and the right to choose, to reverse rights and protections for gay and transgender people. His go-ahead for big energy to tear up federal lands with fracking, oil exploitation, coal mining operations and pipelines threatens life as we know it.

Faced with these threats, what can we do? First, we need to understand what we are up against. We can’t wish and hope that Trump won’t be as bad as we think. We can’t hope that the Democrats will defend our interests. And perhaps most importantly, we can’t blame each other and fall for the one percent’s divide and conquer game. We cannot be divided and tolerate any racist, sexist, anti-Muslim or anti-LGBT talk or behavior.

Students are right to walk out of their schools. People are right to take to the streets and to plan protests for inauguration day to put Trump on notice, day one of his presidency, that we don’t accept his attacks and his open defense of the bosses’ and bankers’ interests at the expense of our lives and those of future generations.

We must stand up for ourselves and organize and we must be prepared to fight back. It is possible. In North Dakota, thousands of people have joined the Standing Rock Sioux, putting their bodies on the line to stop the oil companies from destroying their land, their water and their lives.

But we need to go beyond demonstrations and isolated defensive fights. We need to remember that we are the majority. We produce all the goods. We provide all the services. We make the society run. And we can make it stop. The time to begin is now. Join us!

When we don’t challenge the system that creates the problems, we end up blaming each other. It’s the bosses’ system that created Donald Trump, the capitalist system that puts profits over people’s lives, that exploits and oppresses the vast majority.

They do everything they can to divide and turn us against each other. And then they laugh if we fall in to their trap.

Who Voted For Trump And Why?

In the Midwest swing states, nearly one third of the 700 counties that voted for Obama in 2008 voted for Trump. Why the change? The vote for Trump was in big part a reflection of economic despair and disgust with the policies of Washington.

In Indiana, for example, 100,000 manufacturing jobs have been lost in the last 16 years. The new jobs that exist pay around $20,000 a year. White male workers without a college education have seen their incomes cut 20 percent in the last decades. Eighty-five percent of Trump voters rated the economy negatively.

Clinton said she was going to continue on this course and referred to Trump supporters as a “basket of deplorables.” With these choices, is it really a wonder why some voted for Trump?

Are We All On The “Same Team”?

At their White House meeting Obama and Trump seemed like friends. Obama said that his number one priority now is to make sure Trump succeeds. Trump called Obama a “very good man.”

But during the campaign, Obama said that Trump was unqualified and unprepared to be president, and denounced Trump’s attacks on women, African Americans, immigrants and Muslims. Trump said that Obama’s 8-year presidency was a “disaster” and that he would get rid of Obamacare, and overturn much of Obama’s legacy. So what the heck is going on?

No matter what they say during the campaigns – the politicians who represent the 1% want to make sure that there is a smooth transition of power and that the system that guarantees their profits will continue uninterrupted.

Having The “Talk” With The Kids

Whether we are parents, siblings or teachers, we should tell our young people to treat each other with respect and not to bully others.

But how do we explain to them that a man, who has bullied and insulted women, and threatened minorities, immigrants and Muslims, is president?

Many kids are afraid and worried that their families will be torn apart because of their immigration status or whether they will be harassed for how they look.

While we should try to comfort young people as best we can, we certainly shouldn’t adapt to this insanity. We can tell them that this is their world and they have the right to stand up for themselves and walk out of school from San Jose to Oakland and from Denver to Omaha.