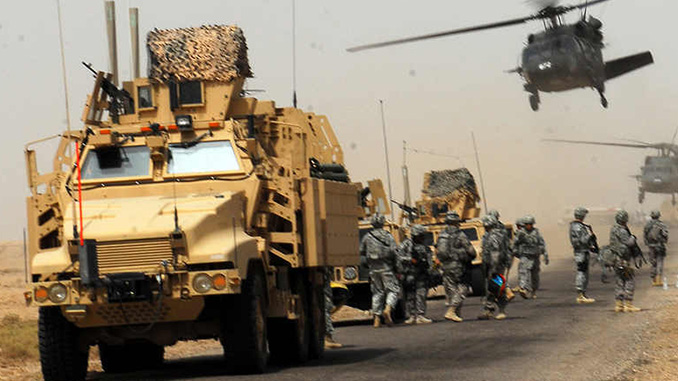 In response to the supposed threat of Iran’s plans to attack U.S. forces or personnel, the U.S. military recently ordered non-emergency personnel out of Iraq and updated its military plans which now includes the possibility of sending 120,000 more troops to the Middle East.

They sent a second aircraft carrier group to the Persian Gulf, which borders Iran. A battery of Patriot missiles were put in place near the Iranian border and four B-52 bombers have already begun their surveillance missions on the Iranian border. This show of military force is part of the ongoing effort to overthrow the Iranian government. This military escalation began in April when Trump had a section of the Iranian military, the Revolutionary Guard, designated as foreign terrorists. For the moment, the verbal threats have calmed. But the threat of war remains.

The relative peace that was established in 2015 through a UN-backed nuclear accord has been disrupted. In exchange for lifting many of the economic sanctions imposed on it, Iran agreed to limit the amount of nuclear fuel it would process. In 2018, the Trump regime pulled out of the agreement and reimposed sanctions. This latest move by the U.S. launches a new economic war that will have serious consequences for the people of Iran. The U.S. is demanding an end to all purchases of Iran’s major commodity – oil, which will create a conflict with China, a major purchaser of Iranian oil. The U.S. is also demanding sanctions against industrial metals and other exports.

For the people of Iran this is a serious threat – economically and militarily. The history of U.S. involvement in Iran began in 1953 with the CIA overthrow of Iran’s democratically elected government, headed by Mosaddegh, replacing him with the Shah. The Shah’s brutal regime was overthrown by the revolution of 1979, which ended U.S. influence in Iran. The U.S. wants to overthrow the regime in Iran, crush its political influence in the region and bring the vast oil fields under its control.

Again the U.S. has brought the Middle East region to the brink of massive war. The Persian Gulf is like a powder keg waiting to explode, An event, planned or accidental, could trigger an all out attack on Iran.

These sorts of actions by the U.S. are not restricted to Iran. From Afghanistan, to Iraq, Syria, and Libya, the region has been torn apart by the U.S. economic and military domination. In addition, close allies of the U.S. carry out similar policies. Saudi Arabia has been waging a genocidal war in Yemen and the Israeli regime bases itself on a merciless persecution of the Palestinian population.

The terrorist bullying of the U.S. isn’t limited to the Middle East. We see the same policies in Venezuela today. For two decades the U.S. has backed attempts to overturn the governments of Hugo Chavez and his successor, Nicolás Maduro. As a consequence the people of Venezuela have faced years of crippling economic sanctions, which created massive unemployment, shortages of all essential goods, food and medical supplies (an estimated 40,000 people have died since 2017). And this year hyperinflation is predicted to reach 10,000,000%!

At the end of April the U.S. supported another coup there. It was a failed attempt to install extreme, right-wing politician Juan Guaidó as president. Some U.S. officials have gone so far as to call him the “duly elected “ president of Venezuela, even though he didn’t run for election in last year’s election which gave the current president Maduro 6,000,000 votes to Guaidó’s zero.

The politicians in the U.S. want us to believe that they are trying to bring democracy to areas of the world that are ruled over by dictatorial regimes. But who could believe them? They support dictatorial regimes across the world and are responsible for the destabilization and destruction of vast regions of the world. Their greedy aims mean misery for millions as a result of exploitation, repression, war and massive environmental destruction.

The regimes in Iran and Venezuela certainly do not represent the interests of the people of those countries. But getting rid of those regimes must be the decision of the people of those countries, not the U.S. rulers. We have every reason to oppose the bullying policies of the U.S. We don’t need a world ruled over by the 1% whose goal is amassing enormous wealth at the expense of the wellbeing of the majority of the world’s people.