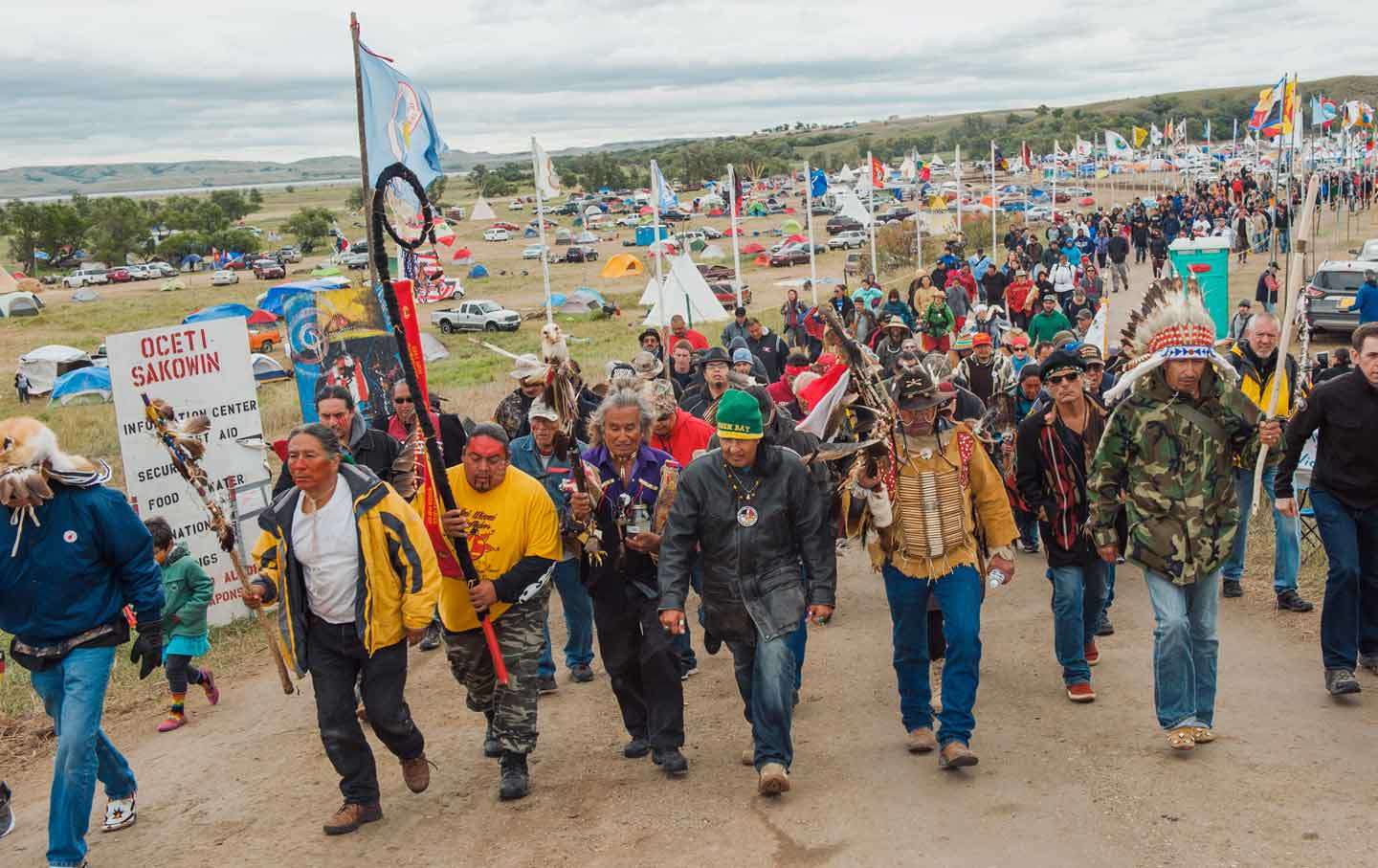 For more than four months, members of the Standing Rock Sioux tribe in North Dakota have mobilized to block the construction of the Dakota Access Pipeline. In the past month members of more than 200 tribes and bands from across North America have joined them. More than 3000 Native Americans and their supporters have joined the camp at Sacred Stone Camp to oppose the pipeline. This 1,200 mile long pipeline could carry 570,000 barrels of thick crude oil a day from the Bakken oil fields in Southern Canada and northern North Dakota and Montana to Illinois. Aside from the threat of oil spills into the rivers and underground fresh water aquifers, this pipeline poses a threat to life on Earth. Refining and burning of this oil is the equivalent of pouring poison into our air and water.

This is the sort of project scientists have been warning us about for decades. Putting more carbon into the atmosphere will drastically change the Earth’s climate. What were once warning signs have now become a dangerous reality.

Scientists warned that if global carbon dioxide content in the atmosphere rose above 350 ppm (parts per million), the Earth’s temperature would rise significantly. It is now consistently over 400 ppm. The last time there was this much carbon dioxide in the atmosphere was 15 to 20 million years ago. It was 5 to 11 degrees F warmer than now. Because of the melting of the Earth’s ice sheets at that time, sea levels were between 75 and 125 feet higher than today. The environment our ancestors evolved in did not yet exist.

Those in power have been driven by the greed of the profits derived from oil. Our new normal is that each month is hotter than the year before. July 2016 was the 15th consecutive warmest month since records began being kept in 1880. Within the next two years, Arctic ice is expected to totally disappear during the summer. In India more than one-fourth of the land is being turned into desert. This year the Great Barrier Reef off the coast of Australia had a massive coral-bleaching event that killed off more than one-fifth of the reef. The new climate reality is here and having a devastating impact in the poorest, most vulnerable parts of the world.

And that is why the mobilization at Standing Rock is important. Those in power used their police and private guards, attack dogs and pepper spray against the “water defenders”. Nearly 70 people have been arrested, some charged with felonies for blocking the operation of equipment. The fight to defend the Earth is one of life and death.

The question facing us all is what to do. The Standing Rock Sioux have taken a stand. Agencies of the Federal government have pretended to show concern, calling for more studies. Their courts have responded, halting the construction for a moment, then giving the go-ahead, then stopping again. The legal focus is on one portion of the pipeline, while construction goes on elsewhere.

The legalities involved are irrelevant. This is people’s water! This is our Earth! We cannot be held back by this system – a system that at one time legalized the genocide of Native Peoples, the slavery of Africans and continues with the exploitation of workers and the environment. The people at Standing Rock are right to stand up to protect the land they live on, the water they depend on and finally to keep the oil in the ground.

Their fight is our fight. To make donations go to http://standingrock.org/