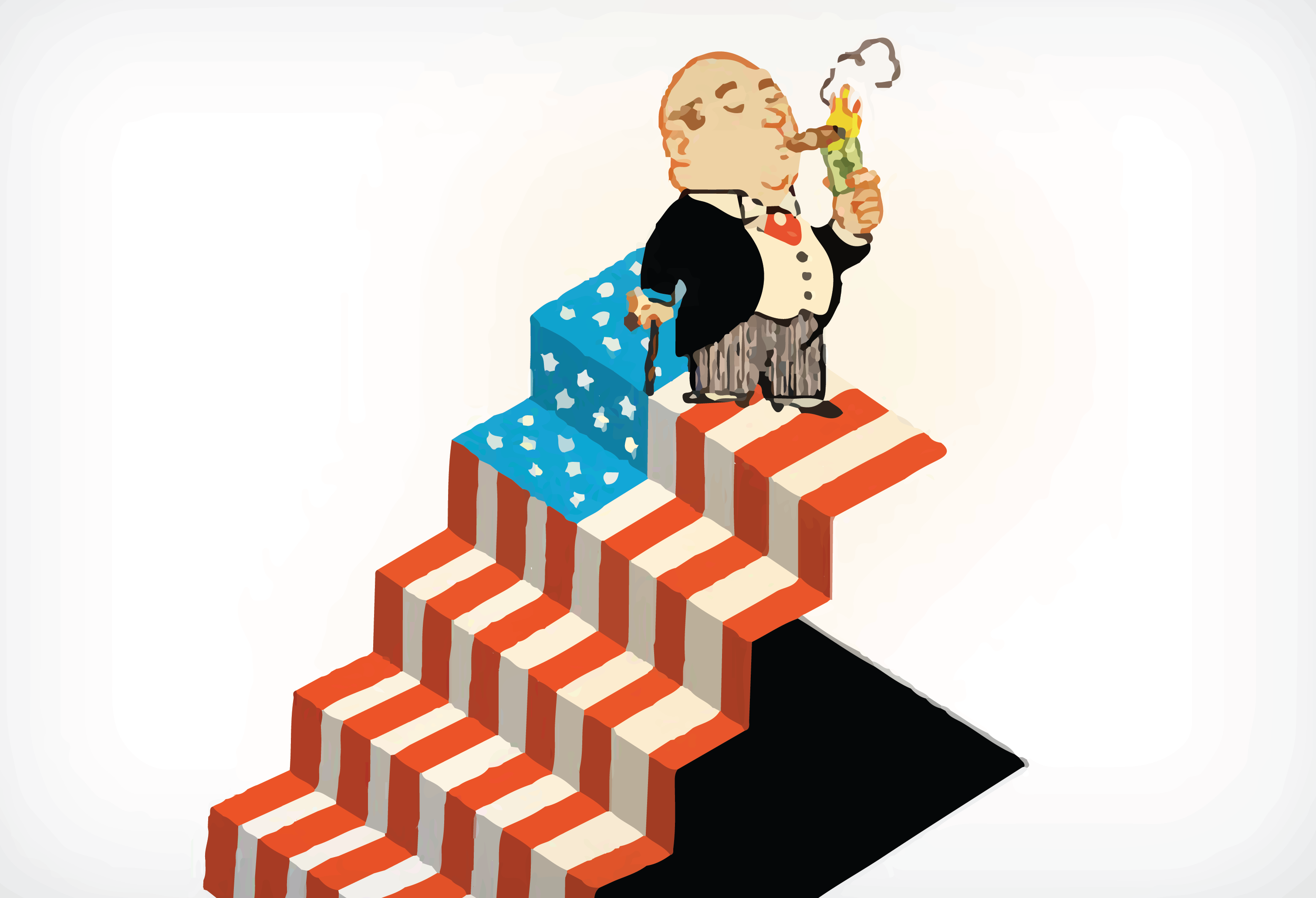 With the Trump administration in the White House, many are wishing that Clinton had been elected. Now, attempting to rebuild its credibility, the Democratic Party has mobilized its forces through various social justice and environmental organizations and coalitions in order to appear to defend the rights of the majority. The message they want people to hear is that opposing the policies of the Trump administration can only mean supporting the Democratic Party.

But are the Democrats really an alternative to the ugly face of the Trump administration? Certainly in style but not in their policies. The wild accusations that Trump fires off in his tweets, along with his executive orders, have heightened the atmosphere of fear and insecurity that he campaigned on. His attempts to ban people identified as Muslims from coming into the US was met by a wide opposition, from the airports to the courtrooms. He has threatened to deport all immigrants without documentation. His attacks on the Affordable Care Act, women’s access to healthcare, and other social programs are more severe than those carried out by the Democrats under Obama.

From threats of increased military actions to attacks on social programs, immigrants, the environment and the most vulnerable in the population, the Trump administration is proceeding with an open viciousness that we haven’t seen demonstrated for years. What Trump has done is to rip the mask off this system, exposing its ugliness for all to see.

Are the Democrats So Different?

A Policy of Endless War all Over the World

Democratic presidents, from Carter to Clinton to Obama, like the Republicans, have carried out a consistent policy of warfare in the Middle East. In the 1980s, it was the Carter Doctrine that proclaimed the vital interests of the US in the Persian Gulf region would be defended by military force. In 1998 Clinton, with the support of Congress, declared war on Iraq. Intense bombing was followed by severe economic sanctions, killing an estimated 500,000 Iraqi children.

Despite Obama campaigning as an anti-war president, the US military continued its actions in Iraq and Afghanistan and extended them into Libya, Syria, Yemen, Somalia, and Pakistan. Obama used drone warfare to carry out regular assassinations that have killed at least 1,000 civilians. In addition, the Obama administration intensified conflict with China, sending battleships along the Chinese coast and building more military bases in the surrounding area. And while there was a reduction in the number of soldiers deployed in combat, it wasn’t reflected in a cut to military spending as billions were spent on drones and other advanced military technology.

Serving the Corporations and the Banks

Trump is rightfully called a Wall Street president with his billionaire background and cabinet appointments tied to banks and corporations. But under Clinton, Wall Street advisors inside and outside the government, worked to remove regulations to allow banks to accumulate greater wealth and make riskier investments, which paved the way for the financial crash of 2008. The Obama administration responded by bringing many of those same Wall Street bankers into the cabinet to set federal policy. As millions of people were thrown out of their homes, lost their retirements and jobs, the Democrats gave trillions of dollars to banks and corporations in bailouts.

Since Trump we’ve seen a policy of climate change denial backed by proposals for massive cuts to scientific research, environmental programs, and the elimination of basic environmental restrictions. But under the Democrats, fracking and offshore drilling expanded, including drilling in the Arctic; coal mining through mountain top removal continued, and a 40-year ban on oil exports was lifted. While temperatures soared world wide, and scientists issued dramatic calls for reducing the burning of fossil fuels, the last three years of the Obama administration were among the highest ever for US oil production (and the hottest in recent history). Like the Republicans, the Democrats defend the oil corporations over the environment – regardless of the catastrophic implications.

Trump says that he’s going to be the law and order President. He has some tough competition when it comes to Bill Clinton. Under Clinton, the prison population skyrocketed. When he was elected in 1992, there were 847,000 people in prison. By 2000, when he ended his second term, 1,334,000 people were imprisoned. This set the stage for an acceleration of mass incarceration of people from poor neighborhoods – especially Black men. This continued under the Obama administration, which oversaw a massive increase in the militarization of the police, spending roughly $2.2 billion on military equipment for police departments, most of which was spent in Obama’s last two years, after movements began against the killings by police. When Trump entered office, there were more than 2.3 million people imprisoned, making the US the largest jailer in the world.

Trump has proposed building a longer wall across the US-Mexico border and hiring an additional 10,000 ICE agents. He has threatened mass deportations and cutting off funding to sanctuary cities. But undocumented immigrants have been terrorized no matter which party is in power. The large wave of immigration from Mexico began under Clinton with the passage of NAFTA (North American Free Trade Agreement). The rules of NAFTA allowed US agricultural produce (subsidized by our taxes) to be dumped into the Mexican economy. This, along with the privatizing of collectively owned lands, drove many small farmers from their farms. Some went to work in sweatshops set up along the border called maquiladoras. Others came to the US looking for work. At the same time, the Clinton administration passed “Operation Gatekeeper,” which doubled the number of Border Patrol agents and began the construction of the border wall, designed to funnel immigrants into the most remote and dangerous terrain, responsible for the death of over 7000 migrants since the wall was constructed. Under the Obama administration, deportations skyrocketed to more than 2.6 million people, ripping families apart and throwing children into detention facilities.

With Trump, there is an open sexual predator in the White House. Together he and Vice President Pence have vowed to criminalize women who choose to terminate a pregnancy and ban all federal funding for abortion clinics and providers. Neither Clinton nor Obama tried to do anything about repealing the Hyde Amendment, a 1976 law which banned the use of federal funds to pay for abortion except to save the life of the woman, or if the pregnancy resulted from incest or rape. Across the country, abortion clinics have lost funding and have been subject to violent attacks, and increasing restrictions have been imposed on women’s rights to control their own bodies. The Clinton administration opposed gay marriage. And while the Supreme Court upheld the right of gay people to marry under the Obama administration – it was due to the organizing and protests of gay people and the change in attitudes in the population, not the Democratic Party. And throughout the last eight years, states have passed laws targeting LGBTQ people with little or no opposition from the Democrats.

Neither Trump Nor The Democrats!

Both the Democratic and Republican Parties have always been the parties of the 1%. Their elections are set up so that their interests will be served, always at our expense and at the expense of the environment. The selection of candidates and the election campaigns that sell those candidates are multi-billion dollar operations that leave ordinary people on the outside. Our only role is to vote in the hopes that this or that candidate will make the changes we need.

Where Does This Leave Us?

The changes we want and need have never come from voting. All the major changes that have benefited the majority have been made when people organized, by the millions, in their workplaces, in their schools and neighborhoods and in the streets and forced business-as-usual to stop.

Our strength lies in our numbers and in the work we do to make this system run. If we want to put a stop to this administration, we also need to understand the system it serves. Our needs cannot be met by this system and that means we can’t rely on the Democrats or the Republicans. The changes we need will only come when we rely on our own forces and turn our opposition into social movements. We make the society run and we can make it stop. And we could go even further and create a different society run in the interests of the majority, by the majority.